Recently, I visited Singapore and managed to pick up a Brother P-Touch PT-2430PC for a relatively cheap 40 SGD. I always wanted a label writer, but didn’t want to deal with pressing little buttons and working with a tiny screen. However, having to set it up, working through some Word-like software just for printing a label also didn’t really thrill me. I rather want to be able to quickly print something from my phone. Thus, I assembled a bit of open software and added some on my own to make this happen: Labeler, a web interface for Brother P-Touch.

The PT-2430PC is ideal, as it has a USB interface, but does not yet electronically check for the authenticity of tapes. Also, it is an old model and available for relatively cheap, while still supporting the current TZe tapes. I attached it to a Raspberry Pi that I have running for other tasks anyway.

Unfortunately, Brother does not supply any USB drivers for the PT-2430PC. However, Dominic Radermacher some years ago created ptouch-print(git), a driver and interface for the PT-2430PC (and others). This compiles fine also on Raspberry Pi with Arch Linux for ARM.

Ptouch-print is a commandline tool. While I am able to use this, the WAF is very low and using it on a smartphone (e.g., via SSH) is also not fun. Thus, a web interface was needed. I quickly whipped up a very basic HTML form with some mini PHP backend, to control at least the most basic features of this printer: Printing single and double lines, as well as showing the installed tape size: 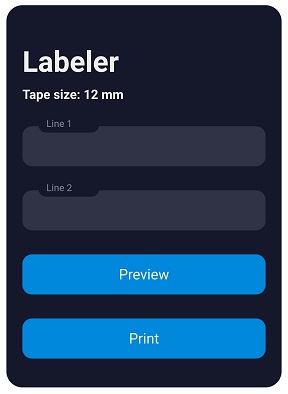 A preview of the print (generated by ptouch-print) is also available: 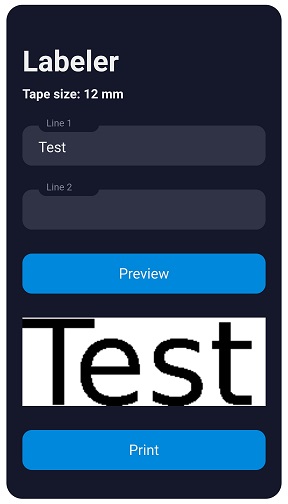 The design is based on the “Placeholders” form by Mikael Ainalem.

Currently, the feature set is very limited. I might extend this in future with things like font selection, image printing, font sizes, etc. depending on my needs. I will only implement what I need, but I am also very open for pull requests on GitHub, if you are missing and have added something.