I am a big fan of the technology in the Kindle. I am not talking about ebooks and Amazon‚Äôs setup to sell them in proprietary formats, DRM, etc. But the E Ink display of the Kindle, the thinness of the device with high energy efficiency and long battery runtimes. Some time ago I thus used a Kindle Touch to build a Kindle Alarm Clock. There, I am using a HTML frontend, shown in the webbrowser of the Kindle with jailbreak and connecting to a backend webserver, implemented in Python and running on the Kindle, as well. When building it, it dawned on me that one could extract this setup into an app framework to make it easier for developers to develop apps for Kindles. This would allow great reusability of older devices, which are rather cheap and might otherwise end up in trash. A complete waste of an excellent technology. Thus, I set out to create kapps, a framework for apps on Kindle. The following article is a copy of the kapps README at the time of writing. There is also a wiki available with more information on its usage.

Some time ago, I built and Alarm Clock for a Kindle Touch. This was based on a HTML GUI, and a Python backend. It was kind of hacked together, but did the job of re-purposing an old Kindle Touch and using its very energy-efficient setup with E Ink display for a custom user interface. While one can generally built upon that to create own applications, the overhead to start a project is relatively high, multiple applications on a single device are potentially incompatible, and launching them might be difficult. I thus for a long time had the plan to extend the setup used for the alarm clock into a framework, which developers can use to create their own applications more easily. Since I have been working on different automotive software platforms, it seemed easy enough to do this in a context with less requirements on reliability and dependability.

The framework is rather rough around the edges for now and gives lots of freedom to the developer, both in terms of backend implementation, as well as frontend. Of course it might be helpful to follow some guidelines, which I shall write in future, but I want to leave it as open as possible, to allow the developer to adjust to his application.

The options for what can be implemented are endless. Here are some ideas:

kapps is still very basic, it currently contains mainly these features, but may be extended as required:

The complete system is based on three components: Frontend, backend and commands.

The frontend is typically HTML pages shown in a web browser. The backend is a Python app, loaded by and integrated with the framework. Such backend app is typically called by a command, which may be coming from the frontend, and may return an HTTPResponse to be shown in the frontend. Commands are generally used to communicate between backend apps, as well as the GUI and apps.

As you can see, commands are essential for connecting the components. Some commands are built-in (e.g., Notify, Quit, Launcher), but every app can bring their own commands. One might compare them with Intents in Android. Commands can also be translated to URLs. This allows embeddeding them into the returned HTML shown on the frontend. The integrated webserver will catch such command calls and call the subscribed Python method with the given parameters.

You first need to fulfill a number of requirements:

Technically, WebLaunch is not required, as it uses the internal browser, but it is a nice wrapper, that I have not yet fully integrated. It is also an extension for KUAL, the Kindle Unified Application Launcher, which we will not be using.

After all requirements are fulfilled, simply copy the folders etc/ and mnt/ from this repo to your Kindle‚Äôs file system root (/).

To show how easy a simple application can be, here are two examples, with and without GUI.

The Quit application is a very basic application without GUI. It consists of only a few files:

While the init.py only marks the existence of a module and is empty, the implementation contained in the quit.py is as simple as this:

By default, every app implements at least the register() method. This creates a Kapp object, implementing the functionality. By default, a Kapp object subscribes to the Home and Icon commands, linking them to the homeCallback() and iconCallback() respectively. When listing the app in the launcher (potentially other places), the Icon command is issued for that app and consequently, the iconCallback() is called to retrieve the icon. This does not need to be static (see e.g., Notifications app). When starting the app, the Home command is issued and consequently the homeCallback() is called, potentially returning an HTTPResponse (see below), or itself calling another command, e.g., to start the launcher.

A simple GUI application can be as simple as this:

The skeleton of this app is identical to the non-GUI app. However, we see that the homeCallback() here returns an HTTPResponse, resulting in a website being shown. Note that the given HTTPResponse is not optimal, as it traps the user on the page with no way to return to kapps. Also note, how the Notify command is being used here to send a notification to the system, when the app is started.

These screenshots are taken directly from the Kindle in kapps using the Screenshot command. 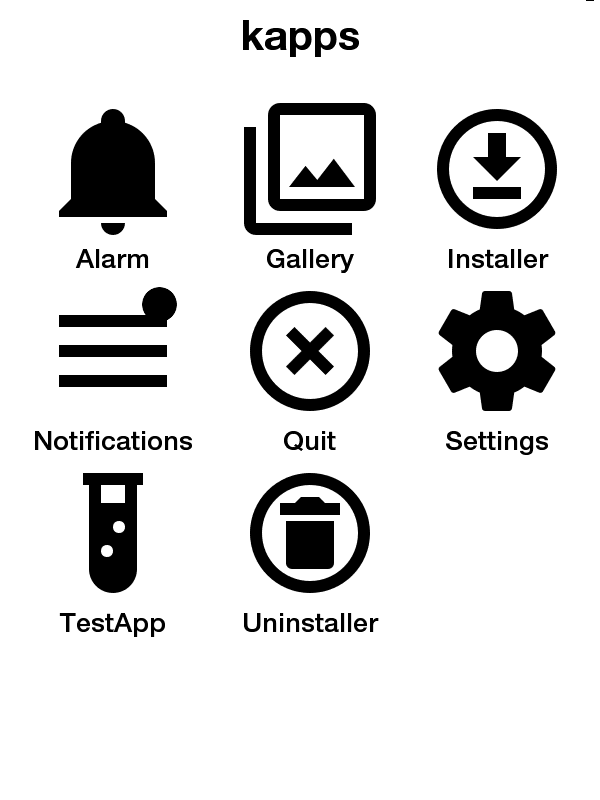 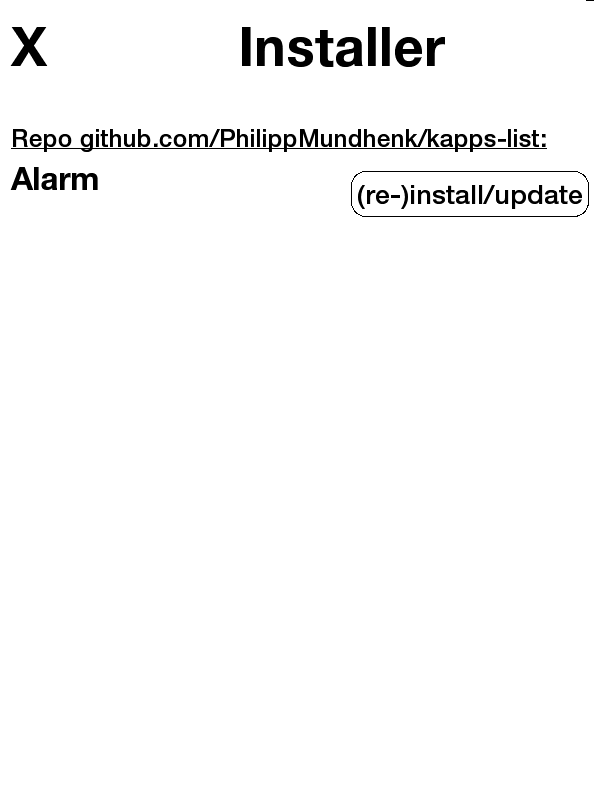 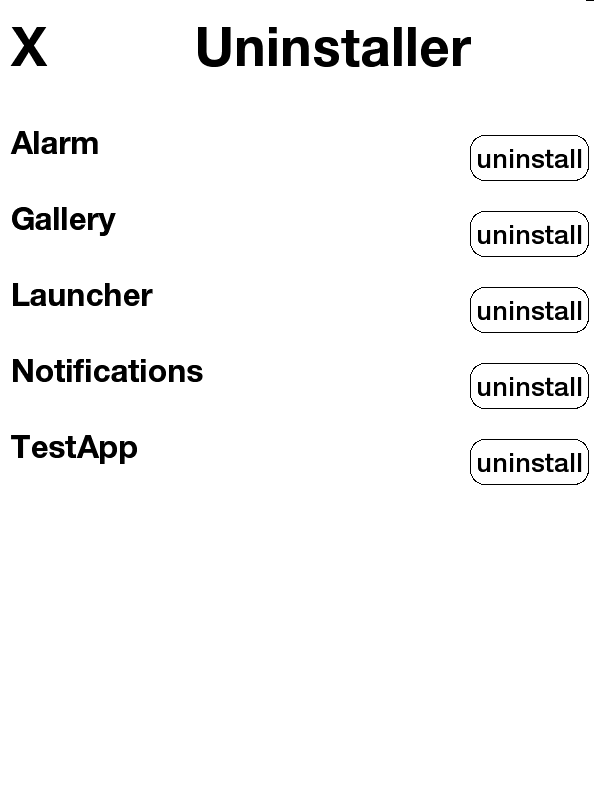 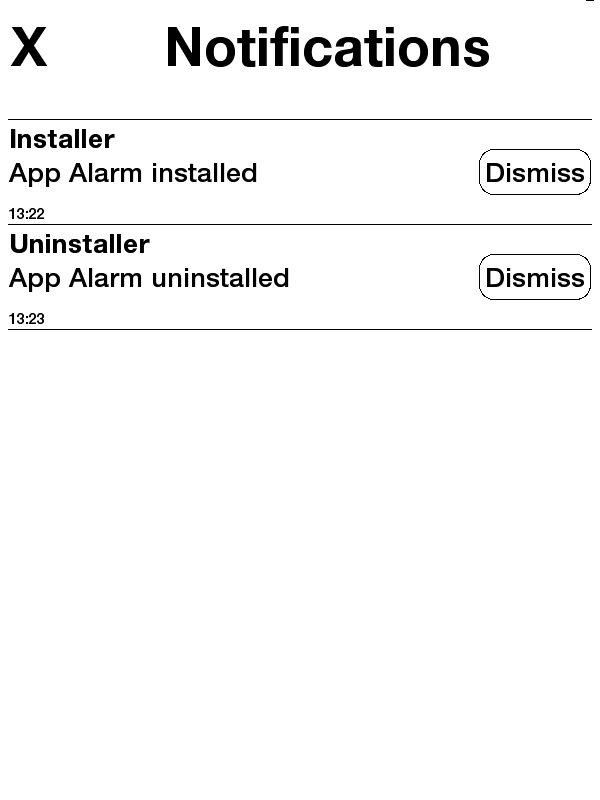 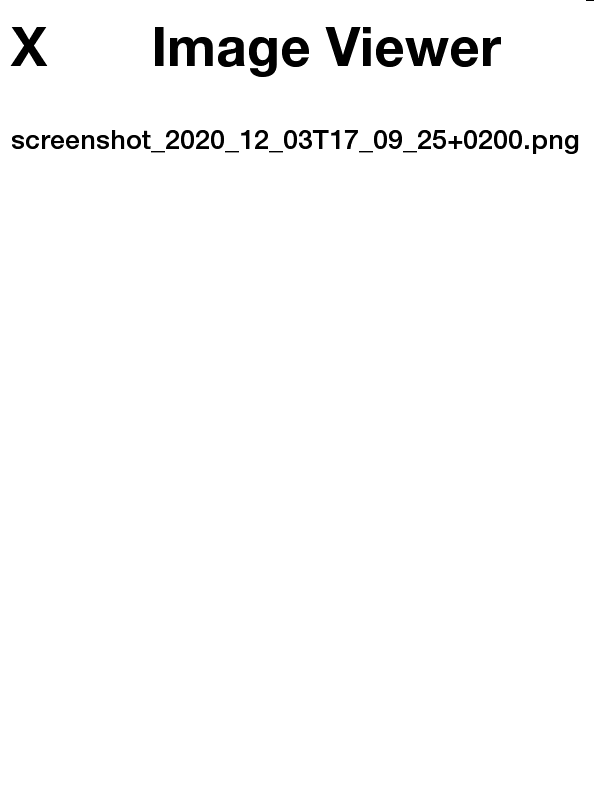 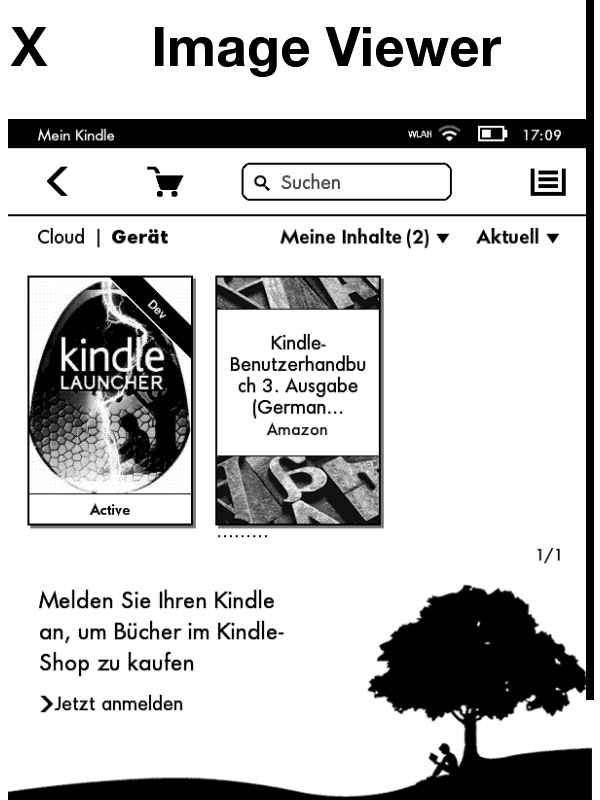 I only built what I needed so far, the feature set might change in future, upon needs and requests. Here are some things on the very top of the list, but in no particular order:

kapps is an easy way to get started with app development for Kindles. While it is still very basic, it contains all the required elements to develop apps, including GUI apps which can be designed freely. The setup procedure with jailbreaking a Kindle might be an initial hurdle, but following the links above, it is rather easy. There is a lot of potential for kapps to be extended. I might do that as I have time.